There are very few certainties in life. Death and taxes immediately come to mind.

You can also be certain that, every four years, the United States will come together to elect a President.

While election campaigns typically garner a lot of attention, the 2020 election has dominated the political and social landscape more than most.

There are a lot of reasons for this. It has been a particularly polarizing election, fueled by social media, civil unrest and the COVID-19 global pandemic (and its economic impact).

Given all of this, it is natural to wonder how the results of the election will impact the markets and your portfolio.

After all, increased volatility in the markets as elections approach is hardly a new phenomenon, as you can see in this chart from Natixis:

What is driving this?

By nature, humans crave certainty and avoid ambiguity or uncertainty.

We will often make decisions based on what we know versus what we do not, even if it that choice does not necessarily benefit us.

For example, you surely know someone who stays at a job that they actively dislike instead of starting that business they have always talked about.

Markets are no different.

As elections approach, markets tend to dip lower due to the uncertainty surrounding the new administration.

Look at the markets on the run up to the 2016 election. While it seemed a foregone conclusion that Hillary Clinton would be voted in as the 45th president of the United States, markets still experienced increased volatility throughout the campaign (see chart below) 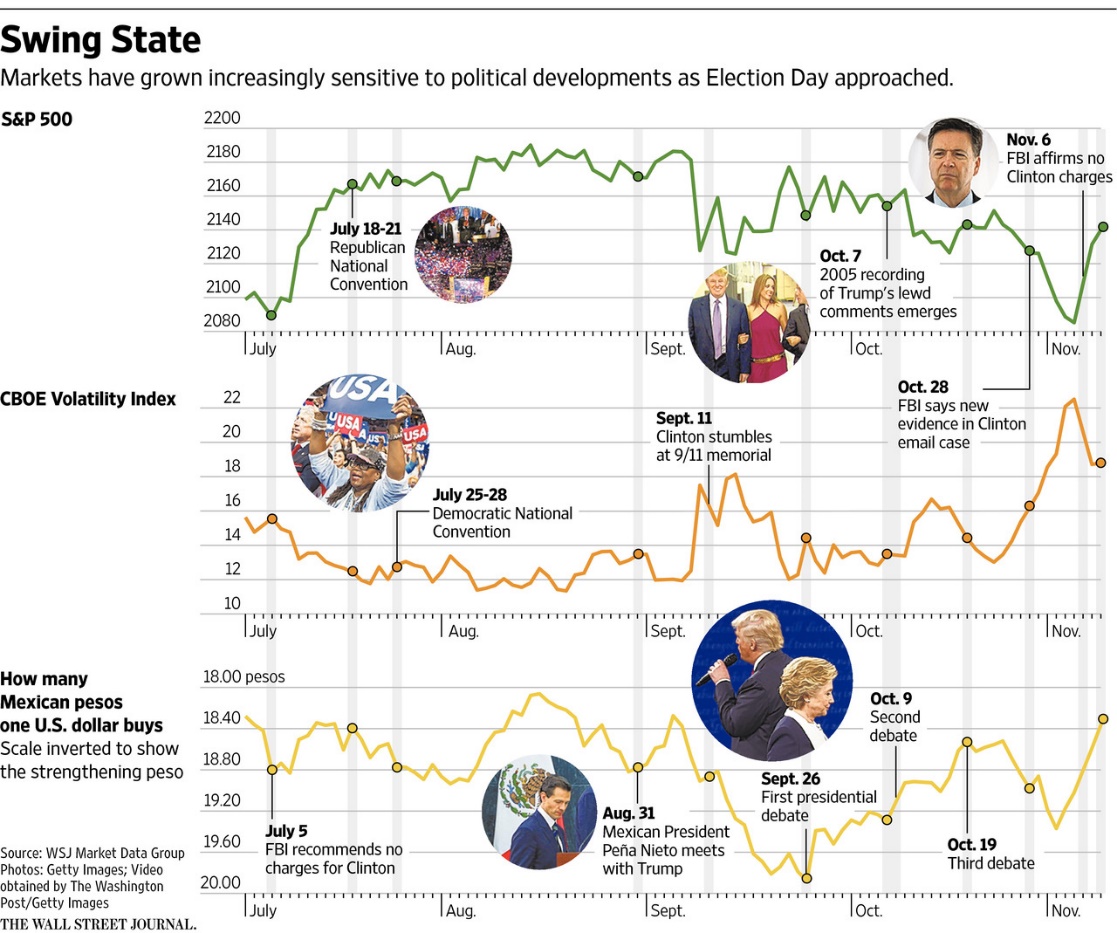 On election night, it became clear that it would actually be Donald Trump, not Hillary, who would win the election. Markets did not respond favourably, as Dow futures plummeted 870 points almost immediately.

The chart below from FactSet/Bloomberg shows a timeline of the Dow Jones Industrial Index on Election night; November 8, 2016.

Yet, by the end of the first trading day after the election (November 9, 2016), the Dow Jones had regained of the pre-trading losses and finished up over the previous day’s close.

It might not be as quickly as 2016 but once the election results are known, markets do historically trend higher as investors have clarity surrounding the new administration.

So, from a market perspective, does it matter who wins the 2020 election?

The prevailing narrative is that Republicans are better for the market due to their policies that encourage higher earnings growth for companies. Is this really true?

Let’s have a look at this chart, which illustrates the average S+P 500 total returns for a Democratic vs. a Republican president. 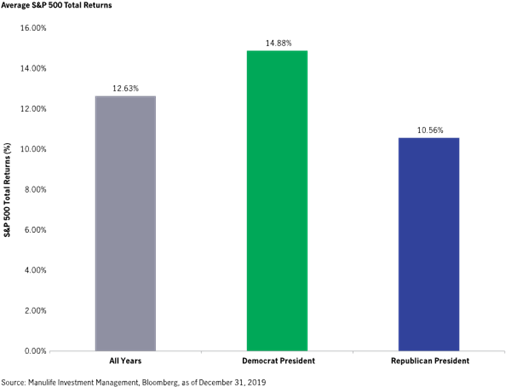 What gives? Have we been wrong all along?

Think about George W. Bush. From the outside, you’d assume his pro-business approach would be good for the markets. Yet, his cumulative stock market returns for his eight years in office was -40%, the worst of any president in recent memory.

Bush’s market problem wasn’t necessarily policy-based. Rather, he was unfortunate to start his first term during the dot-com crash. Markets were further spooked by the terrorist attacks of September 11, 2001.

After righting the ship from 2003-2006, Bush’s stock market legacy took a major hit in the final year of his second term. 2008 saw the housing bubble in the United States collapse, leading to a calendar year return of -37%.

It is important to remember that the sitting President of the United States is not the sole driver of the markets. There are many other factors (economical, political, etc.) that the President may have some impact upon but does not control completely.

While Trump and Biden have different stances on a number of key economic policies, from economic stimulus packages to tax to international trade, history has shown that it is likely not wise to attempt to make long-term portfolio decisions solely on the outcome of an election.

As discussed in our Kawhi Leonard piece, one of key principles of financial success is the ability to ignore the nosie and stay disciplined and committed to your long-term investment plan.

In other words, don’t ride the emotional rollercoaster!

If you have any questions about the markets and how they impact your portfolio and your financial plan, please reach out to me at jeff@chapmanfinancial.ca.