In November 1986, a venerable institution was looking to make a significant change.

Twenty years removed from their last league title and mired in 21st place, the storied football club turned to a manager who had recently led his native country to a spot in that summer's World Cup.

The club was Manchester United, and the manager was Alex Ferguson.

The hire itself was not surprising. Ferguson was one of Europe's top young managers, leading Aberdeen to a shocking 1983 UEFA Cup Winner's Cup title over heavily favoured Real Madrid.

It's what happened after the hire that's important.

Under Ferguson, Manchester United leapt up to finish the 1986-87 season in 11th place. The following season was even better, with a second-place finish. The future seemed bright.

However, the 1988-89 season did not meet anyone's expectations and the club finished in 11th place.

The start of the 1989-90 season was even worse. After a 5-1 defeat against hated rival Manchester City in the Manchester Derby, it appeared that Ferguson's days were numbered. Given the results, no one would have criticized the Manchester United brass if they had decided to give Ferguson his walking papers.

Yet, they didn't. Instead, Ferguson and the club agreed to a three-year contract extension just days after the loss to Manchester City.

Manchester United had their man, and they were going to be patient and let him finish the job.

Patience – a quality many of us would love to have more of.

It's easy to lose your patience when the kids are yelling at you after a long day at the office, when traffic isn't cooperating, or when you spill your dinner.

It's also easy to lose your patience when it comes to investing.

The investing world has changed significantly in the past two years. The "buy and hold" strategy of the past has seemingly been replaced by a series of meme stocks and NFTs.

(For those who don't know, an NFT is a digital asset. You can find a great explanation here.)

More than ever, we are bombarded with messages and alerts that encourage us to take action. Traditional media seizes upon any market downturn or negative earnings result. Social media provides a platform for others to advertise their latest "ten bagger" or chastise others with derogatory comments like "have fun staying poor."

As I discussed in a previous blog post, this "noise" can be deafening and lead to impulsive decisions.

Despite the relative landscape changing, most people are still better served by being patient and taking a long-term perspective.

Just listen to the famed investor, Warren Buffett, discussing the link between patience and successful investing: 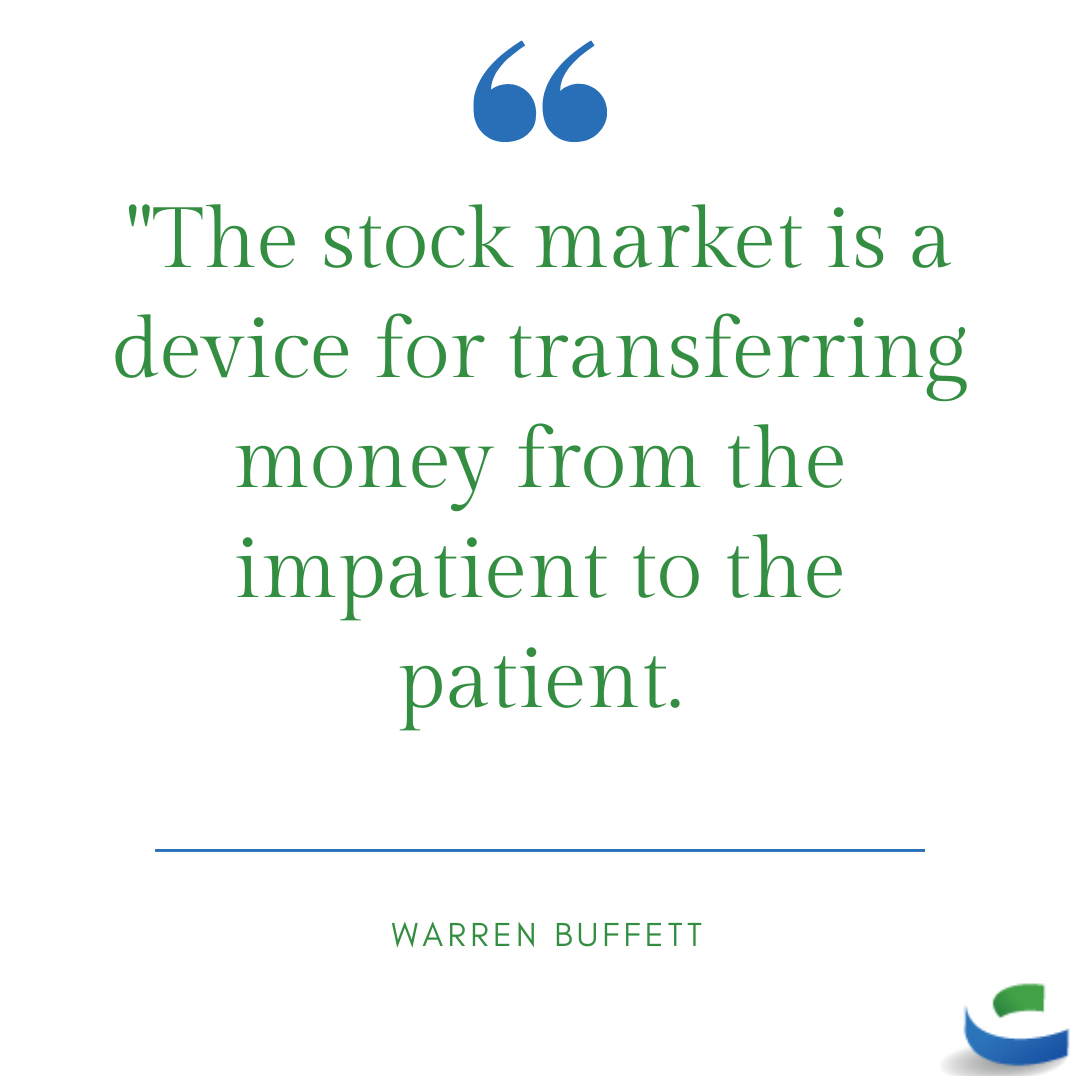 Let's examine a few important examples of where being patient with your investments would have helped.

It seems so long ago, doesn't it? It's hard to imagine, but the start of the COVID-19 pandemic represented the start of a strong bull run in the markets.

But in the third week of March 2020, you'd have a hard time convincing anyone that it wasn't "different this time."

The markets were down almost 30% for the first three months of 2020. Uncertainty swirled as the world was plunged into the midst of a pandemic.

During that time, I fielded numerous calls from clients looking to sell off their equities and move to cash.

Our brains are wired to seek safety. So when the markets are on a downward slide, and everything about the future seems uncertain, it's natural to consider this option. Psychologically, it's difficult to see the money you worked so hard for seemingly disappear.

Having patience in this type of situation is the best thing for you and your portfolio. Staying invested (and not selling everything) prevents you from turning a paper loss into an actual loss.

As the saying goes: "Volatility is the price you pay for performance."

Having a trusted financial planner in your corner is often vital in situations like this. They can help you remain grounded when the markets get rocky. In addition, they will work with you during these times to help you maintain a focus on your long-term goals and prevent you from making a rash decision.

If you've spent any time on Financial Twitter (#FinTwit for short), you have undoubtedly seen a variation of the following tweet: 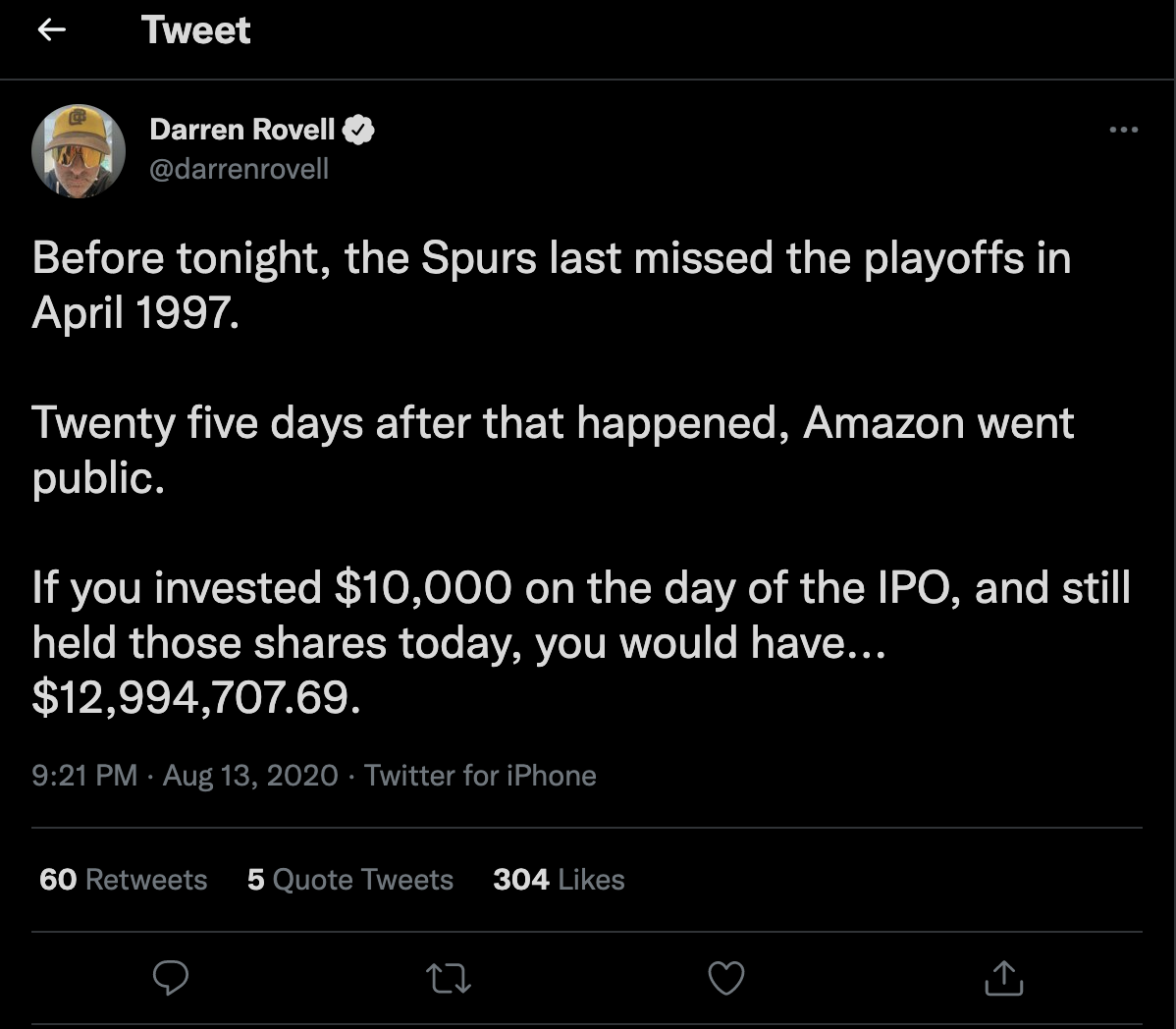 It's an easy target. Amazon is a "darling," and its stock price has increased exponentially since its IPO. If only investing was this easy. How many of us have looked back at other decisions in our life and said, "if I only knew…"?

It's always easier to second guess yourself and your decisions with the benefit of hindsight. What about all the tech stocks that IPO'd in the late 1990s that went bust? (I'm looking at you, Pets.com)

The problem with the above tweet is that stocks don't go straight up (despite what you might have heard). Instead, there's often a lot of interim volatility, and as we discussed before, volatility is what tries investors' patience.

A more telling tweet would be this from Ben Carlson: 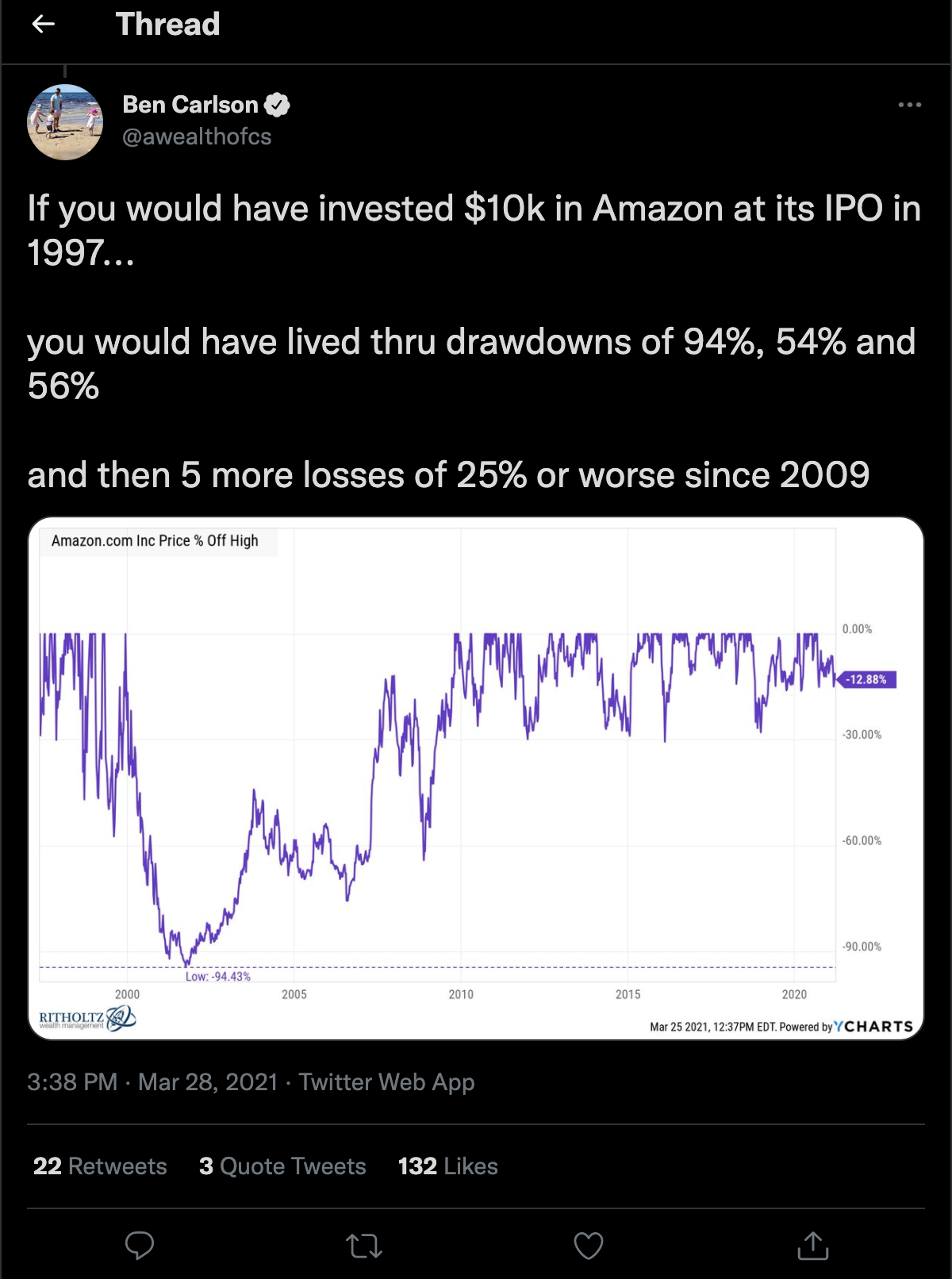 Think about that for a second: how would you react if a stock or fund that you owned fell by that much? A 94% drawdown is something that would test the patience of even the most steely investor.

Holding on to a stock through large drawdowns requires immense patience and faith in the company.

Once again, let's turn this over to the "Oracle of Omaha" who said: 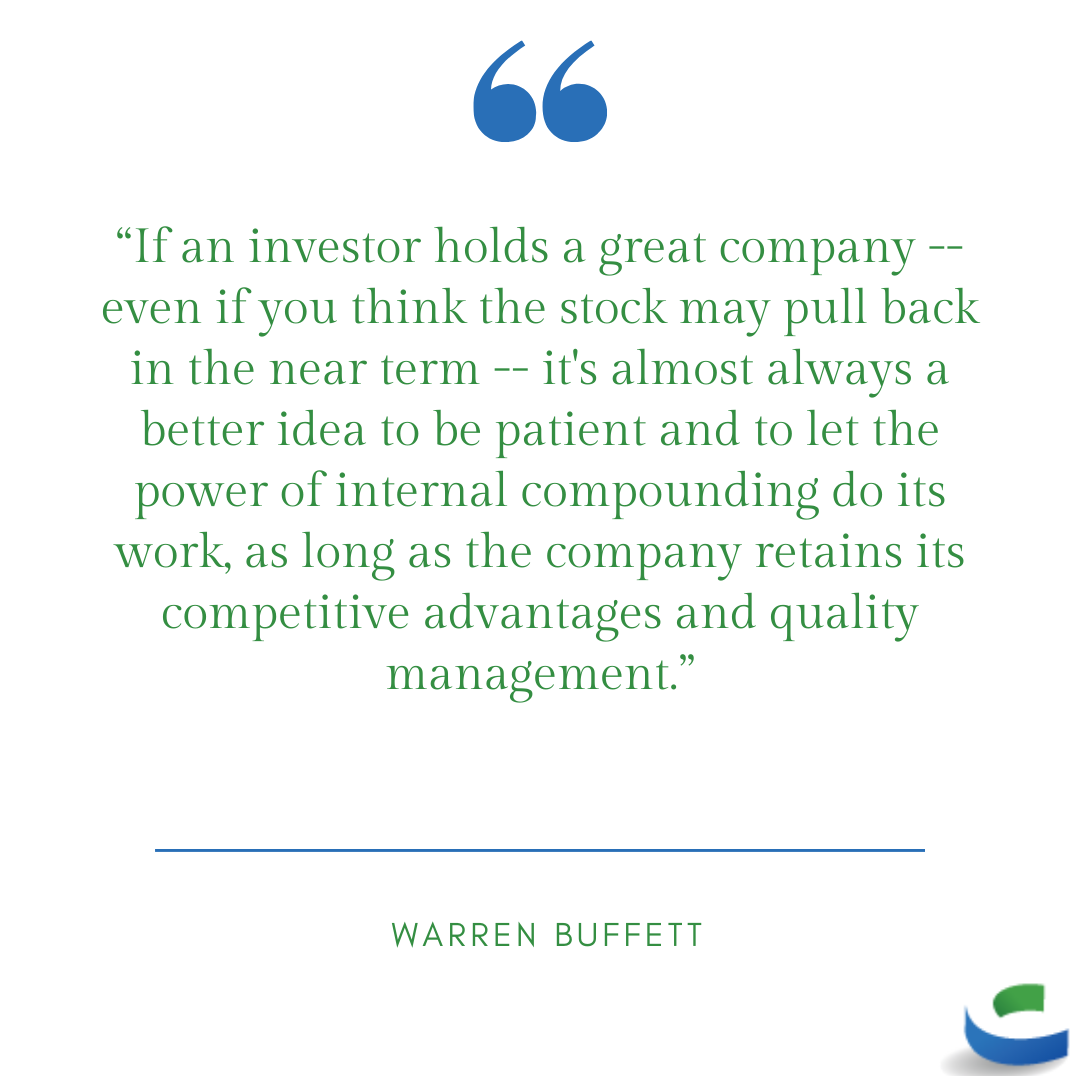 How to be more patient

Investing during volatile times can challenge your discipline and commitment, but there are principles for your investment strategy that can help ease your mind and keep you focused on the long term:

In times of unusual volatility, you may sometimes feel an impulse, large or small, to push the panic button. But panicking often leads to wrong decisions.

In the end, Alex Ferguson became Sir Alex Ferguson after being knighted by the Queen in 1999. He led Manchester United to 38 trophies (including 13 Premier League titles), developing such superstars as Cristiano Ronaldo and David Beckham along the way. As a result, he's widely considered to be the greatest manager in Premier League history.

The investor in me cannot help but be impressed by the patience of the Manchester United management. Without a willingness to forge through the early ups and downs of Sir Alex's tenure, they most certainly would not have achieved that level of success. Yet as a Liverpool fan, I am conflicted as it would have been nice to see my club capture a few of those titles instead.